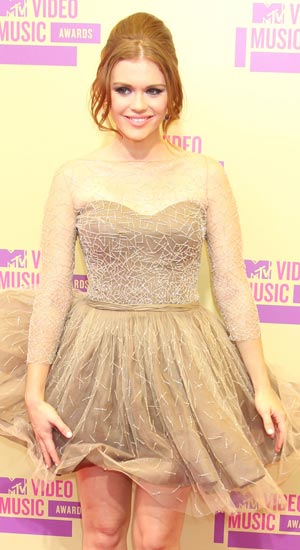 Bio:Holland Roden (born Holland Roden in Dallas, Texas on July 28, 1988) is an American actress. She is best known for playing mean girl, Lydia Martin, on MTV’s Teen Wolf. She also played Skylar in Bring It On: Fight To The Finish. Roden got her big break with HBO’s 12 Miles Of Bad Road, but the show never made it to its premiere. Her television credits include CSI: Crime Scene Investigation, Weeds, Lost, Cold Case, Community, Criminal Minds, The Event, and House of Dust. She was introduced to Teen Wolf creator, Jeff Davis, on Criminal Minds.

Personal Life:Holland Roden has been linked to Teen Wolf costar, Colton Haynes, though the pair were not together. She is currently dating an older-looking fellow, but his name hasn’t yet been made public knowledge.