Well, hello there, Halsey! The singer hit the 2018 MTV EMAs red carpet on Nov. 4, and she looked sexy as ever in her nude-colored, sheer dress while posing for photos. See the pics here!

G-Eazy might want to look away after seeingHalsey’samazing look at the MTV Europe Music Awards on Nov. 4! She showed up to the event solo, and looked seriously stunning on the red carpet. For the event, Halsey wore a totally sheer dress, which featured carefully-placed fabric over her nipples, and a completely open back. Super sexy! The ensemble also included silver embellishments throughout, along with big, lacy sleeves. The singer had her cropped hair colored dark brown for the event, and looked totally fierce! She completed the look with hoop earrings that matched the embellishments on the dress to perfection, along with Sophia Webster shoes.

Halsey is in attendance at the EMAs as a performer, and she’s in good company! Also hitting the stage will beAlessia Cara, Bebe Reha, Jack & Jack, Janet Jackson, Jason DeRulo, David Guetta, Nicki Minaj, Little Mix, Marshmello, Anne-Marie, Bastille, Panic! At The Disco andRosalia, along withHailee Steinfeld, who’s also serving as the show host. Talk about a star-studded group! Meanwhile,Camila Cabello is up for the most nominations of the night (six), followed byAriana Grande andPost Malone, with five each.

The last few weeks have been very up and down for Halsey, who split from her boyfriend,G-Eazy, for the second time in October. However, she also released her new song, “Without Me,” and has been enjoying its success in the days since. 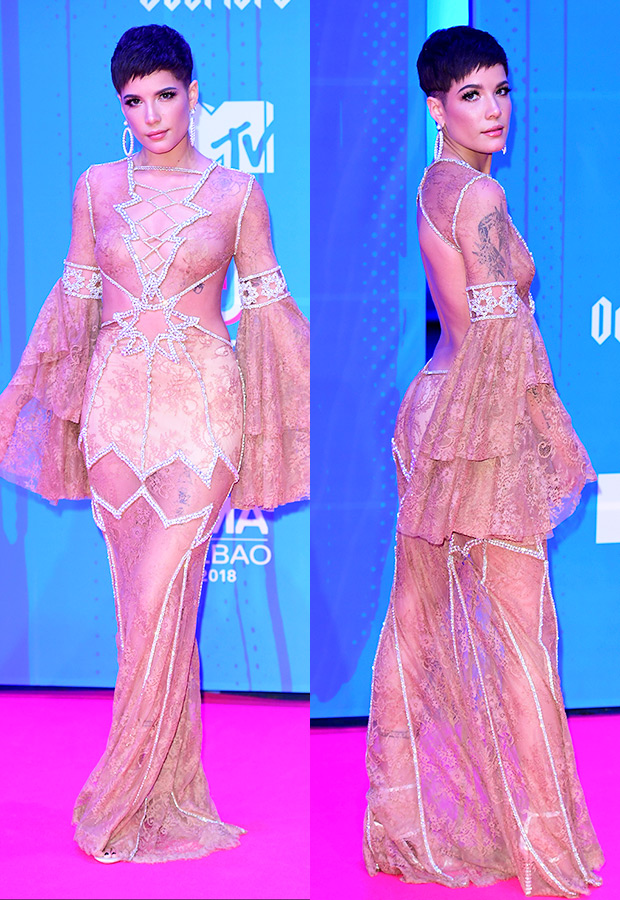 It certainly doesn’t seem like Halsey is letting the split get to her, though. Over the weekend, she looked like she had a blast while celebrating Halloween in a sexy Poison Ivy costume. Then, on Halloween day earlier this week, she dressed as a sexy dead cheerleader fromJennifer’s Body.

‘Floribama Shore’: Nilsa & Gus Reveal If It Was Awkward To Live Together Amidst Her Pregnancy