Leave it to Gwen Stefani to make an entrance. There can be no doubt that Blake Shelton’s lady love looked incredible at the 2019 ACM Awards.

If you saw heads whipping around at the 2019 ACM Awards on April 7, it was probably due to Blake Shelton and Gwen Stefani, who skipped the show’s read carpet, but snuck in just in time for the opening performance. As one of music’s hottest couples, it was a treat to see The Voice judges and couple of almost 4 years together, making a date night out of Academy of Country Music Awards, and Gwen certainly dressed for the occasion in Las Vegas.

Gwen shined bright like a diamond in a slinky, silver mini dress, complete with long sleeves, a high neck, and a short, short hem. That let her pair the incredible shimmery look with a pair of literal thigh-high black boots and fishnet stockings. Since her outfit stood out all it’s own, Gwen opted out of any crazy bling to go with her dress, but instead made another statement with her hair, piling it high in an Ariana Grande level pony.

This is the second year in a row that Blake and Gwen enjoyed the ACMs together for a date night. Last year, Gwen was front and center, singing along with Blake, as he took to the stage to perform his then-single ‘I Live It.’ During tonight’s show, Blake will again be performing, only this time the country-rock anthem ‘God’s Country’, which serves as the lead single off his next studio album. 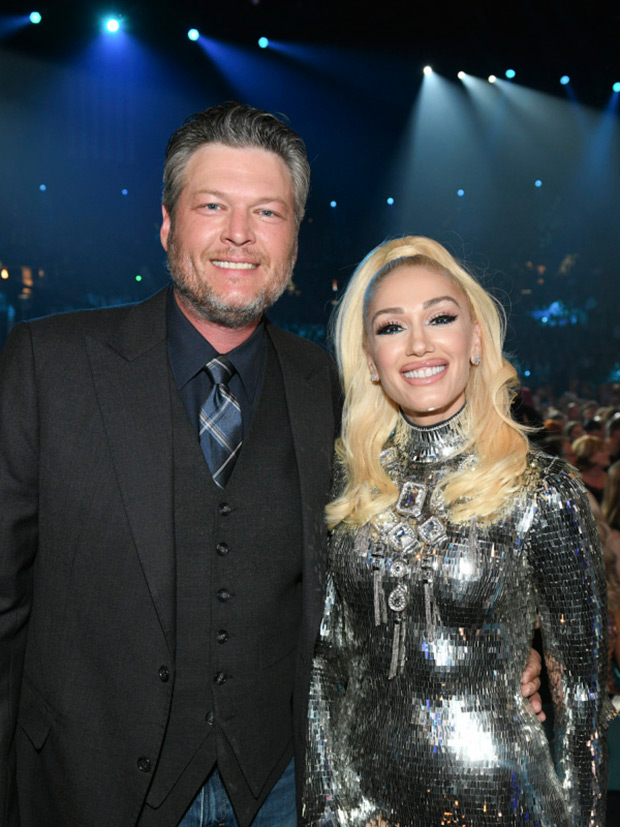 Of course, all eyes will be peeled to see if Gwen bumps into Blake’s ex, Miranda Lambert, who is nominated for 2 awards, is also meant to perform, and could possibly be arriving with her new husband, Brendan McLoughlin,who she very secretly and surprisingly married in February 2019. Should the two couples run into each other, however, do not expect an awkward confrontation, as sources have told HollywoodLife EXCLUSIVELY that Miranda is prepared to great her ex and Gwen with a ‘nice smile and hello.’