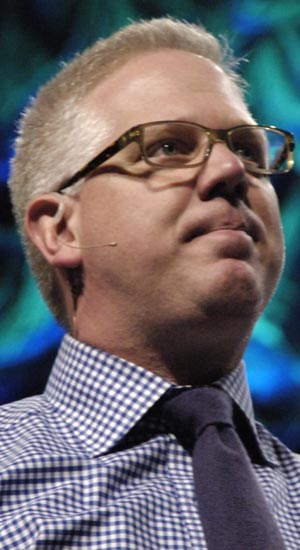 Bio:Glenn Beck (born Glenn Edward Lee Beck on February 10, 1964 in Everett, Washington) is an American conservative radio host, vlogger, author, entrepreneur, political commentator, and former television host. He hosts the Glenn Beck Program, an American nationally syndicated talk-radio show that airs on Premiere Radio Networks. He was the host of the Glenn Beck TV show, which ran from January 2006 to October 2008 on HLN, and from January 2009 to June 2011 on the Fox News Channel. Beck has written six New York Times–bestselling books. He is the founder and CEO of Mercury Radio Arts, a multimedia production company. Beck indentifies himself as politically conservative, which is the basis for much of his television, radio, and book content.

Personal Life:Beck married his first wife, Claire, in 1983, and the couple had two daughters, Mary and Hannah. Mary developed cerebral palsy as a result of a series of strokes at birth in 1988. The couple divorced in 1994. He married his second and current wife Tania in 199. Beck is a recovering alcoholic and drug addict, and has been diagnosed with Attention Deficit Hyperactivity Disorder. In July 2010, he was diagnosed with macular dystrophy.