In a night celebrating ‘heavenly bodies,’ Gig Hadid looked absolutely divine! The model arrived at the Met Gala in an outfit that was so stunning, we’re still marveling over it!

It wouldn’t be the Met Gala without Gigi Hadid, 23. Once again, the gorgeous model left onlookers stunned, arriving at New York City’s Metropolitan Museum of wearing yet another phenomenal outfit. At the May 7 event, Tommy Hilfiger’ and Donatella Versace’s BFF stepped out on the red carpet wearing a colorful Versace gown that took our breath away. Even better, it was totally on point with the gala’s theme ofHeavenly Bodies: Fashion and the Catholic Imagination.

Gigi confidently walked the carpet alone in a dress that was truly a work of art. The gown was reminiscent of a church’s stained glass window complete with beautiful colors, sparkles, and a thigh-high slit. While the dress was strapless, she wore a sleeve on her right arm, which only added to the uniqueness of her entire look. Meanwhile, the model’s hair was worn long and down as she polished her ensemble off with glittery statement earrings. There’s no question Gigi is one of our best-dressed celebs of the night! 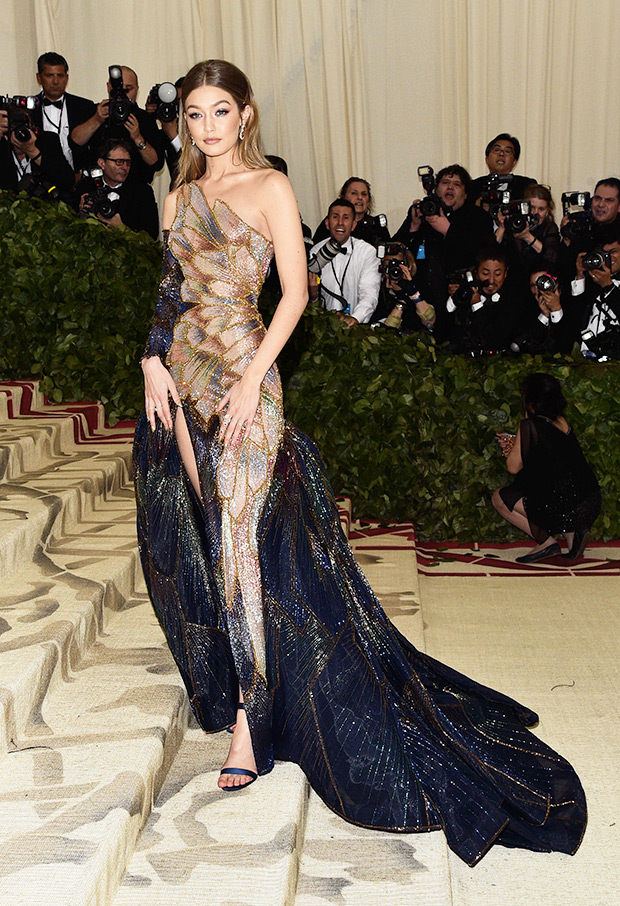 With the theme of the 2018 gala being “Heavenly Bodies: Fashion and the Catholic Imagination,” many expected Gigi to steal the show like she has in the past two years. While everyone knew Gigi’s fashion was guaranteed to show off her own “heavenly body,” what people wanted to really know is if she would include Zayn Malik, 25, as her “plus one”? She and Zayn were spotted passionately kissing in New York on April 29. The PDA all but confirmed that, after breaking up earlier in the year, they had decided to give love a second chance. Would they solidify this reunion by appearing together at the Met Ball?

After all, it was the Met Gala where Gigi and Zayn made their red carpet debut as a couple. At the 2016 event, under the “Manus x Machina: Fashion In An Age Of Technology” theme, Zayn wore a tuxedo with a pair of metal gauntlets. Gigi matched in her Tommy Hilfiger gown, with chic embroidered corset and a series of metal rings that made her look part NYFW, part Westworld. “My inspiration came from modern machinery fused with Old Hollywood glamour,” Tommy told Vogue. “We looked at nostalgic, feminine pieces from our most recent Fall 2016 collection and then re-imagined them with a futuristic spin.”

While Zayn didn’t join Gigi for the 2017 Met Gala, she still turned heads with her custom Tommy Hilfiger gown. Channeling the spirit of designer Rei Kawakubo for the night’s Comme des Garçons theme. In a nude asymmetrical dress that was a miniskirt on one side and a full tulle train on the other, she Gigi gave Angelina Jolie a run for her money when it came to dramatic legs. With a fishnet stocking and a stiletto heel, Gigi was clearly the belle of this Ball.