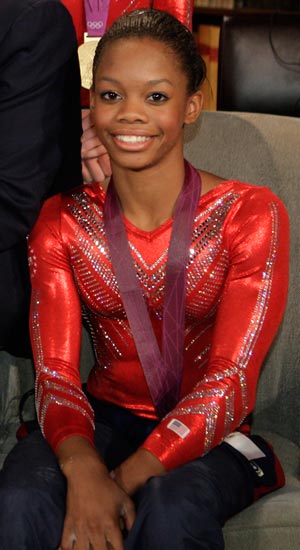 Bio:Gabby Douglas (born Gabrielle Douglas Dec. 31, 1995) is an American gymnast. At age 14, Gabby moved away from her family to train with elite coach, Liang Chow, who trained Olympic Champion Shawn Johnson. Gabby earned the only guaranteed spot for the 2012 Olympic Women’s Gymnastic team by winning the Olympics Trials competition. Gabby won her first gold medal with the 2012 U.S. Women’s Gymnastics Team, their first since 1996. Two days later, she became the third- straight American to win the gold in the women’s all-around, and the first African- American to achieve gold in the event ever.

Personal Life:Gabby is the daughter of Thomas Douglas, an Air Force staff sergeant, and Natalie Hawkins and the youngest of four children. Her older sister Arielle taught her to do a cartwheel at age three, and by four, Gabby taught herself to do a one-handed cartwheel. At 14, Gabby finally convinced her mom to let her move away from their Virginia Beach home to train in West Des Moines, Iowa after two years of pleading. She lived with her host family, the Partons, while training with coach Liang Chow.

J.Lo Says New Song Is About ‘Not Being Afraid’ To Move On After A-Rod Split