As one of CMT’s Artists of the Year in 2021, Gabby Barrett shined bright while attending an event to celebrate the honorees on Oct. 13.

Gabby Barrett looked absolutely stunning while attending theCMT Artists of the Year event on Oct. 13 in Nashville. The blonde beauty, who was one of seven honorees at the event, walked the red carpet in a strapless black dress with an animal print. She paired the look with matching, shoulder-length gloves, and had her hair pulled back with two tendrils left hanging down to frame her face.

During the show, Gabby also took the stage to perform her latest hit “The Good Ones.” She changed into a sparkling white pantsuit for the performance, with her hair in the same style as her red carpet look. Of course, Gabby’s husband,Cade Foehner, was by her side as she was recognized at the event. They walked the red carpet together, and he’s expected onstage with her to play guitar while she sings her heart out.

This was Gabby’s first time being honored as an Artist of the Year by CMT. Her fellow nominees were Chris Stapleton, Luke Combs, Kelsea Ballerini andKane Brown. Additionally,Mickey Guyton was named the Breakout Artist of the Year, whileRandy Travis the Artist of a Lifetime Honor. 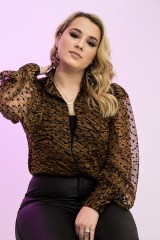 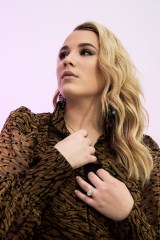 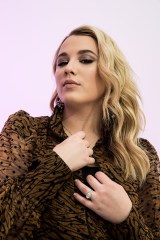 She just brought the house down with a stunning performance of "The Good Ones" #CMTAOTY pic.twitter.com/EyACS0YpAJ

The past year has been quite a whirlwind for Gabby, both personally and professionally. Not only has she been slaying the country music scene, but she and Cade also welcomed their first child, Baylah, in January 2021. The baby girl was born just three months after the pair’s one-year wedding anniversary in Oct. 2020.

‘Avengers: Endgame’ Cast Then & Now: See How The Heroes Have Changed Since Their 1st Films

Porsha Williams, 38, Poses In A Sexy Bikini During ‘Baecation’ With Fiance Dennis McKinley

NeNe Leakes, 51, Nearly Busts Out Of Sheer Black Top & Hubby Gregg Is Here For It: ‘Yassss’