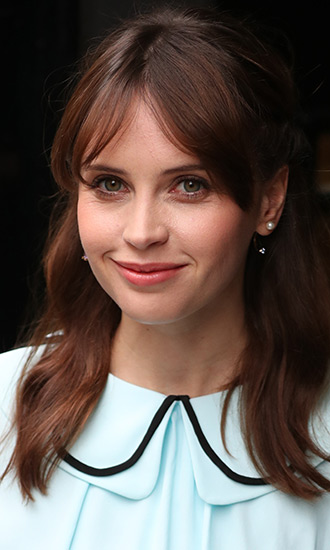 Bio:Felicity Jones (born Felicity Rose Hadley Jones in Birmingham, England, UK on Oct. 17, 1983) is an English actor. Felicity first began her career at the young age of 12 years old, acting in the 1999 film, The Treasure Seekers. She then went on to take a number of jobs on TV including a recurring role in season 1 of The Worst Witch in 2001. She also starred in the series’ sequel Weirdsister College, which began two years later. Following her childhood acting days, Felicity took some time off to study at Wadham College, Oxford. After she graduated from university in 2006, the actress picked up her career, starring in a handful of films including Northanger Abbey, The Tempest, and 2011’s Like Crazy, which was met with critical acclaim and garnered many awards including a special prize at the 2011 Sundance Film Festival. In 2014, Felicity’s performance in the 2014 film The Theory of Everything as Jane Hawking also earned great attention, scoring nominations for a Golden Globe, SAG, BAFTA, and an Academy Award for Best Actress. Felicity also starred in the hit sci-fi and Star Wars spin-off Rogue One: A Star Wars Story as Jyn Erso.

Best Known For:Felicity Jones is best known for her role as Jane Hawkings in the 2014 film The Theory of Everything. She is also known for her performance as Jyn Erso in Rogue One.

Personal Life:Felicity Jones met sculptor Ed Fornieles while she was studying at Oxford in 2003. The two dated for ten years until they split in 2013.