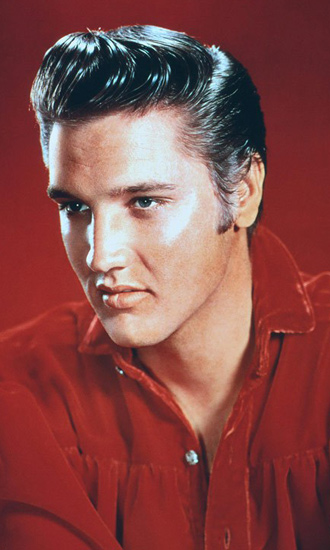 Bio:Elvis Presley (born Elvis Aaron Presley in Tupelo, Mississippi on January 8, 1935) was an American singer and actor. He first shot to fame with the release of his single titled “Heartbreak Hotel” in 1956. He quickly became of the biggest names in the world and was a defining icon of the 20th century. Elvis also made his film debut in 1956 with the release of Love Me Tender. He would go on to make a number of films, including Viva Las Vegas and Jailhouse Rock. He had a number of songs like “A Little Less Conversation,” “Hound Dog” and “Falling in Love with You.” Elvis’ prevalent drug use halted his career in the 1970s. He died at the age of 42 on Aug. 16, 1977.

Best Known For:Elvis is best known for his music and movie career in the 1950s and 1960s. He became a sex symbol and global icon over the course of his career. Elvis released dozens of albums, but the songs that remain classics today include “Hound Dog,” “Jailhouse Rock” and “A Little Less Conversation.”

Personal Life:Elvis married Priscilla Wagner in 1967. They divorced in 1973. During their marriage, they had one daughter, Lisa Marie Presley. He has two grandchildren — Riley and Benjamin Keough. Elvis died on Aug. 16, 1977 after being found unresponsive in his bathroom on his Graceland mansion property.