A new standout takes the top of the leaderboard on the first night of Disney Week during season 30 of ‘DWTS.’ Plus, four different couples score at least one 9 on the Oct. 11 episode!

Disney week is here on season 30 ofDancing With the Stars! For the Oct. 11 episode, the contestants channel heroes from the Disney franchise, as they take the dance floor for their first of two nights of competition this week. Derek Hough is back in his judges’ chair after missing last week due to possible exposure to COVID-19, which means there are four judges to impress once again.

In addition to choreographing their dances like normal this week, the pros had to incorporate special moves from Mickey Mouse into their routines. The team that adds Mickey’s moves the best will receive two extra points from the judges at the end of the night. Meanwhile, the Disney week competition continues with villains night on Oct. 12.

First up on Oct. 11 isJoJo Siwa and her partner,Jenna Johnson. They dance a gorgeous Viennese Waltz to “A Dream Is A Wish Your Heart Makes” fromCinderella.Len Goodman calls the routine “beautifully danced” and praises JoJo for her “fantastic footwork,” whileCarrie Ann Inaba gushes over JoJo’s ability to “tone it down” and let Jenna “shine.”JoJo and Jenna’s scores: Carrie Ann Inaba = 9; Len Goodman = 8; Derek Hough = 9; Bruno Tonioli = 9; TOTAL SCORE = 35.Those are the first 9s of the season, too!

'DWTS' Winners Over The Years — Photos 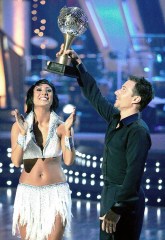 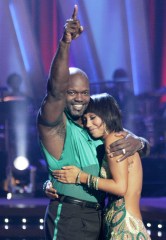 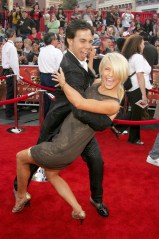 Melanie C.’s dance withGleb Savchenkois inspired byMary Poppins. They perform a high-energy Jazz. Derek admits that some of the transitions weren’t perfect, but says the dance was great overall. Meanwhile, Bruno and Carrie Ann point out that the dance briefly got out of sync, but laud the difficulty of the choreography.Melanie C. and Gleb’s scores: Carrie Ann = 7; Len = 8; Derek = 8; Bruno = 8; TOTAL SCORE = 31.

Next,The Bachelor’sMatt James dances a Quickstep with his partnerLindsay Arnold. Their routine is inspired by “The Incredits” fromThe Incredibles. Bruno congratulates Matt on his footwork improving, and Carrie Ann and Len admit that the reality star still has to work on his technique. However, overall, the judges are happy with Matt’s work ethic and energy.Matt and Lindsay’s scores: Carrie Ann = 6; Len = 6; Derek = 7; Bruno = 7; TOTAL SCORE = 26.

Jimmie Allenis up next. His Mulan-inspired dance with Emma Slater is a Paso Doble to “I’ll Make A Man Out Of You.” He dedicates the dance to his late father, who died in 2019. The judges rave over how well the Mickey Mouse moves are incorporated into the routine. Carrie Ann describes the dance as “delicious” and says she “loved it.”Jimmie and Emma’s scores: Carrie Ann = 8; Len = 7; Derek = 8; Bruno = 7; TOTAL SCORE = 30.

Up next isAmanda Kloots andAlan Bersten, who ended last week on the top of the leaderboard. They perform a Rumba to “You’ll Be In My Heart” from Tarzan. Len says the dance was “brilliant,” and calls it “so beautiful.” As always, the judges are in awe of Amanda’s moves on the dance floor, even though she had a brief moment of being out-of-sync with Alan during the Mickey portio.. Amanda and Alan’s scores: Carrie Ann = 8; Len = 8; Derek = 8; Bruno = 8; TOTAL SCORE =.32.

Olivia Jadeperforms a Samba to “I Just Can’t Wait to Be King” fromThe Lion King with her partnerVal Chmerkovskiy. The judges praise Val for putting a ton of Samba content in the routine, and Olivia for executing it so well. “You’re so versatile. You have such range,” Bruno raves.Olivia and Val’s scores:Carrie Ann = 8; Len = 9; Derek = 9; Bruno = 9; TOTAL SCORE = 35.

The next performance is fromThe Miz andWitney Carson. They dance a Quickstep to “A Friend Like Me” fromAladdin, with Mike fully decked in blue as the Genie. The judges are super impressed by the Mickey Mouse challenge portion of the dance, and praise The Miz for giving “everything he has” week after week.The Miz and Witney’s scores: Carrie Ann = 8; Len = 7; Derek =8; Bruno = 8; TOTAL SCORE = 31.

Kenya Mooreis up next with her partnerBrandon Armstrong. They dance a Contemporary number to “How Far I’ll Go” from Moana. After landing in the bottom two last week and having to be saved by the judges, Kenya leaves it all on the dance floor. Carrie Ann calls out mishaps during some of Kenya’s lifts, but says she’s “so proud” of Kenya for coming back so strong this week. Derek says the routine was a little “timid” at first, but gushes over Kenya for opening up and coming into her own.Kenya and Brandon’s scores: Carrie Ann = 7; Len = 7; Derek = 8; Bruno = 7; TOTAL SCORE = 29.

Next,Brian Austin Green and his real-life girlfriend,Sharna Burgess, dance a Waltz to “Someday My Prince Will Come” fromSnow White. As always, their chemistry is top-notch as they perform the romantic number on the dance floor. Len isn’t pleased with the lack of Waltz in the choreography, and the judges agree that Brian still has some improving to do. Meanwhile, Sharna calls out Brian and Sharna for having a lift in their routine. Brian and Sharna’s scores: Carrie Ann = 6; Len = 6; Derek = 7; Bruno = 6; TOTAL SCORE = 25.

GymnastSuni Lee is up next with a Salsa to “Colombia, Mi Encanto” from the new movie, “Encanto,” which she dances with partner Sasha Farber. “That was so great. So much fun. Well done!” Derek raves, as he praises Suni for opening up more every week. Bruno points out how great the addition of the Mickey Mouse challenge was to this dance, as well.Suni and Sasha’s scores: Carrie Ann = 8; Len = 8; Derek = 9; Bruno = 8; TOTAL SCORE = 33.

The next performance is fromMelora Hardin andArtem Chigvintsev. Their Quickstep is to “I Wanna Be Like You” fromThe Jungle Book. “It’s the best Quickstep I’ve see so far this season,” Bruno gushes, while applauding Artem for the content in the routine. “You always bring something unexpected to every dance floor and that’s what makes you special,” Carrie Ann adds.Melora and Artem’s scores: Carrie Ann = 9; Len = 9; Derek = 9; Bruno = 9; TOTAL SCORE = 36,which is the highest score of the night!

Cody RigsbyandCheryl Burke are back in the ballroom after their bouts with COVID this week. They perform a Jive to “Standout” fromA Goofy Movie. Carrie Ann urges Cody to work on “finishing [his] moves” in the future, and Len isn’t thrilled with the lack of Jive in the routine. “I was a bit disappointed,” he admits. “The Jive should be right up your street.”Cody and Cheryl’s scores: Carrie Ann = 7; Len = 6; Derek = 7; Bruno = 7; TOTAL SCORE = 27.

The final dance of the night is fromIman Shumpert andDaniella Karagach. Their Foxtrot is to “Let It Go” from Frozen. “You delivered a really elegant Foxtrot,” Len gushes. “It’s wonderful to see a great big guy trying to show romance and movement.” The dance isn’t perfect, but the judges praise over Iman’s improvement, especially in his frame.Iman and Daniella’s scores: Carrie Ann = 8; Len = 6; Derek = 8; Bruno = 8; TOTAL SCORE = 30.

At the end of the night, Melora and Artem are at the top of the leaderboard with a 36, followed by JoJo/Jenna and Olivia/Val, who both scored 35s. At the bottom is Brian and Sharna with a 25. However, there are still two extra points to be awarded for the team who did best at the Mickey Mouse challenge — and they go to Jimmie and Emma! That brings Jimmie and Emma’s score up from a 30 to a 32, putting them in 5th place. There is no elimination, as Tyra Banks announces that no one is eliminated, and the couples will all be returning to the dance floor for Disney Villains night on Oct. 12!