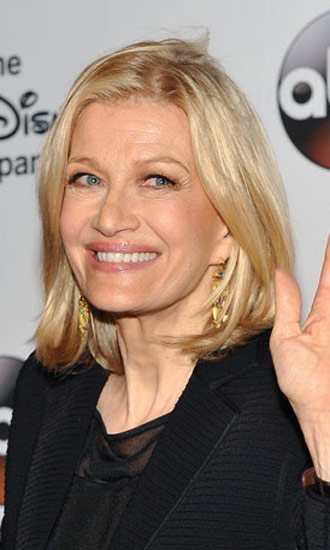 Bio:Diane Sawyer (born Lila Diane Sawyer on Deember 22, 1945 in Glasgow, Kentucky) is an American television journalist. Diane has had a long and storied career, which began in 1967 as a news and weather reporter for local Louisville, Kentucky station WLKY-TV. In 1970, she became a White House press aide under President Nixon, and would eventually draft some of his public statements. By the time Nixon left office, Diane was his staff assistant, and she stayed on during the Nixon-Ford transition in 1974-1975. She helped Nixon prepare his memoirs, as well as his famous interviews with journalist Davis Frost in 1977. In 1981, she returned to broadcast journalism as an anchor on CBS Morning News, and left not much later, in 1984, to become a correspondent for 60 Minutes. From 1989 to 1998 she was a co-anchor on Primetime Live, and from 1998 to 2000 she was co-anchor on 20/20. Her longest-running job was at ABC as co-anchor on Good Morning America from 1999 to 2009. At the same time, she also co-anchored Primetime. Finally, in 2009 she accepted a position as anchor at ABC World News, making headlines when she left on June 25, 2014. Diane was inducted into the Television Hall Of Fame in 1997, and has received a number of accolades during her hugely successful and inspirational career. Her notable interviews include Saddam Hussein, George W. Bush, Barack Obama, Mahmoud Ahmadinejad, and many, many more.

Best Known For:Diane Sawyer is best known for being a broadcasting legend, conducting interviews with some of the most important people in the world, as well as co-anchoring programs such as Good Morning America and Primetime.

Personal Life:Diane was married to film and theatre director, Mike Nichols, until his death in 2014. Diane previously had relationships with Frank Gannon, a fellow Nixon aide, and Richard Holbrooke, a U.S. diplomat. As she worked with the Nixon administration during the Watergate scandal, she was once rumored to be the infamous “Deep Throat.”

James Taylor Of ‘The Bachelorette’