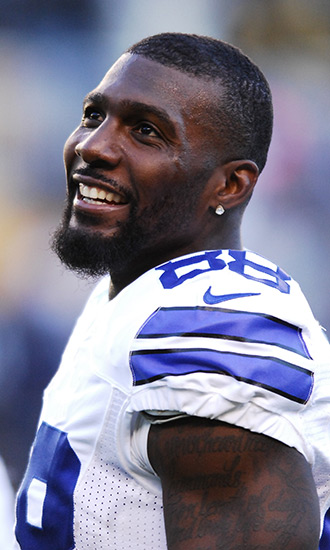 Bio:Dez Bryant (born Desmond Bryant on November 4, 1988 in Galveston County, Texas) is an American football player. Dez plays in the NFL for the Dallas Cowboys as their wide receiver. His athletic talents were apparent from the start, as he caught 48 passes and made 16 touchdowns during junior year of high school. Moving into college, Dez played for Oklahoma State where he earned All-American honors. Dez was also targeted by the Denver Broncos, but due to character concerns, he ended up under a 5-year contract with the Cowboys.

Best Known For:Dez is best known for playing as wide receiver in the NFL with the Dallas Cowboys.

Personal Life:Born into a troubled family, Dez was forced to move a lot and went on to live in eight different homes throughout high school. Dez was sued in 2011 for $861,350 on account of legal fees and failing to pay for the cost of jewelry that he acquired on credit. The following year, he was arrested for domestic violence after allegedly attacking his mom, Angela Bryant. Dez shares two children with his girlfriend, Ilyne Nash.