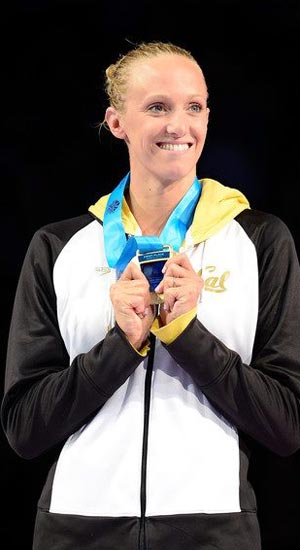 Bio:Dana Vollmer (born in Syracuse, New York on November 13, 1987) is an American swimmer and Olympic gold medalist. As a talented and competitive young swimmer, Dana was only 12 years old when she built a name for herself by competing in the 2000 U.S. Olympic Trials. Although she did not make the team that year, Dana proudly represented her country in the 2004 Olympics, and brought home a gold medal in the 4 x 200-meter freestyle, and set the world record for the same event. Dana began her college career swimming for the University of Florida, and later transferred to the University of California, Berkley to complete her college career. In 2003, Dana underwent heart surgery for Long QT (Syndrome), which left her swimming with a poolside defibrillator for many years. Through her incredible career thus far, Dana has won 27 medals in international competitions, including 15 gold medals. This impressive resume has pegged Dana as a front-runner to bring home the gold, yet again, in the 2012 London Olympics. Dana is back, ready to set records, and bring the U.S more victories.

Best Known For:Dana is best known for competing in the 2004 Olympics in Athens, Greece. She won a gold medal and set the world record in the 4 x 200-meter freestyle. Dana was also named the 2009 NCAA Swimmer of the Year, and has 27 medals under her belt – all at the young age of 24.

Personal Life:Dana is married to Stanford swimming alum, Andy Grant. After the 2004 Olympic games, Dana struggled with her health and couldn’t catch a break, incurring injury after injury. Now, with a new attitude and a healthy body, Dana is not letting anything stand in her way of gold.