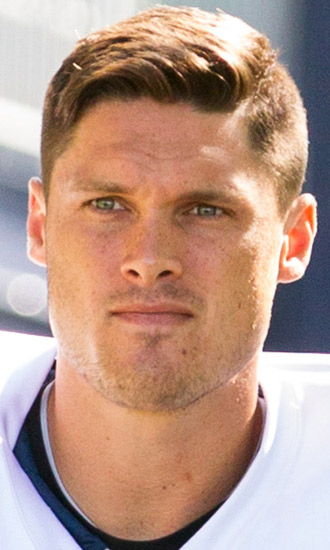 Bio:Chris Hogan (born Christopher James Hogan on October 24, 1988 in West Haven, Connecticut) is an American professional football player. Chris grew up in Wyckoff, New Jersey, playing football and lacrosse at the Ramapo High School. He was an All-New Jersey performer as a junior and senior in Lacrosse and an all-state football player as a senior. Since there weren’t many football scholarship offers, Chris decided to enroll in Penn State to help his college lacrosse career. As a freshman, he started all 13 lacrosse games, scoring 11 goals. He graduated in 2010 with one year of college sports eligibility remaining, so he enrolled in Monmouth, securing a spot as a receiver on the school’s football team. His one year of college football saw him make 12 receptions for 147 yards and three touchdowns. It wasn’t easy for him to get into the NFL. In July 2011, he signed as an undrafted free agent with the San Francisco 49ers. He was released in Sept. 2011. That same month, he signed with the New York Giants but he was released two weeks later. In Dec. 2011, he joined the Miami Dolphins‘ practice squad, but his contract was terminated in Sep. 2012. He finally made it to the NFL in 2012, after joining the Buffalo Bills. After three seasons with the Bills, Chris signed a three-year, $12 million dollar contract with the New England Patriots. He had the best regular season of his career, making 38 receptions for 680 yards and 4 touchdowns.

Personal Life:Chris was featured in the 2012 season of HBO’s Hard Knocks documentary series. Reggie Bush nicknamed him “7-Eleven” because he was “always open.” Chris married his wife, Ashley Boccio, in 2016. In addition to football and lacrosse, Chris is interested in cooking.