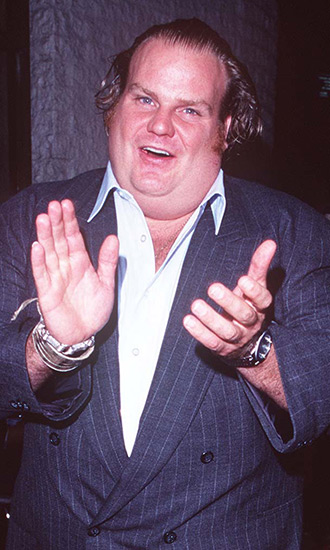 Bio:Chris Farley (born Christopher Crosby Farley in Madison, Wisconsin on February 15, 1964) was an American actor and comedian. He was a cast member of Saturday Night Live and often worked on projects with Rob Schneider, David Space, Adam Sandler and Chris Rock. Some of his most well-known SNL characters include Matt Foley, a motivational speaker who “lived in a van, down by the river” and a Chippendale’s dancer in the famous sketch of the same name. In June 2015, a documentary on his life, titled I Am Chris Farley, was released. In his early improvisational days, he performed with Improv Olympic and Second City Theatre in Chicago. In 1997, he died at the age of 33 from a drug overdose.

Best Known For:Chris Farley was best known for his various characters on Saturday Night Live and his roles in the films Tommy Boy, Beverly Hills Ninja and Black Sheep.

Personal Life:When Farley made a guest appearance on Saturday Night Live in 1997, it would be his final appearance, as he soon succumbed to his struggle with obesity and drug abuse. The Red Hot Chili Peppers song “Californication” contains a tribute to Farley in the form of the line “Farley is an angel and I can prove this.” He was posthumously awarded a star on the Hollywood Walk of Fame in 2005.