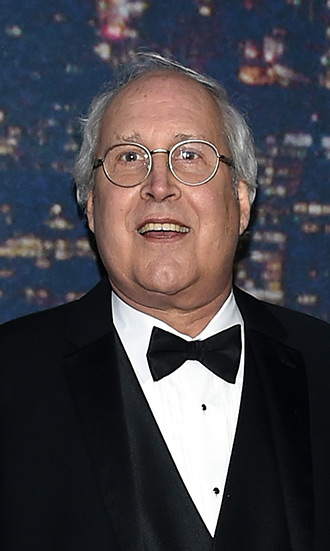 Bio:Chevy Chase (born Cornelius Crane Chase in New York, New York on October, 8, 1943) Is a comedian and actor who rose to fame after the first season of Saturday Night Live in 1975 and for his work in the National Lampoon movies.

Best Known For:Chevy Chase is best known for being one of the original cast members of Saturday Night Live where he was the first to sit behind the iconic “Weekend Update” desk. Following his run on the show, he portrayed Clark Griswold in the National Lampoon’s Vacation films as well as his movies Foul Play, Caddyshack and ¡Three Amigos! In the 90s Chevy’s career slowed down with the cancellation of his short-lived late night talk show, The Chevy Chase Show. Then in 2010, Chevy returned to TV in the NBC show, Community and appeared in the film, Hot Tub Time Machine.

Personal Life:Chevy Chase was born in Manhattan, New York City to parents Edward Tinsley Chase and Cathalene Parker. Before getting his big break on SNL Chevy co-founded the group “Channel One” in 1967. Then, in 1975 he signed on to be a cast member in the inaugural season of SNL. After one year he left the show and moved to Los Angeles where he married his first wife, Jacqueline Carlin which was later dissolved just 17-months later. In 1986, Chevy was admitted to the Betty Ford Clinic to seek treatment for an addiction to prescription painkillers. Chevy married his third wife, Jayni Luke in 1981 and together the pair have three daughters, Cydney Cathalene, Caley Leigh and Emily Evelyn.