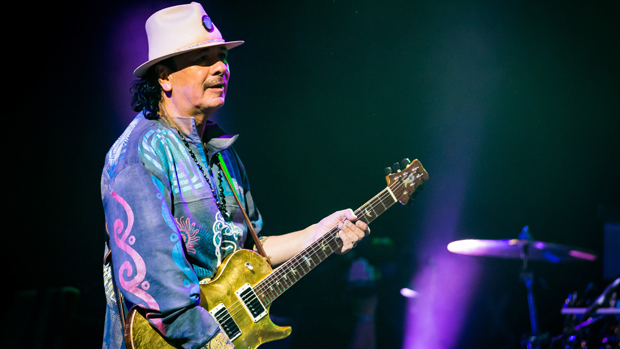 Bio:Carlos Santana (born July 20, 1947 in Autlán de Navarro, Jalisco, Mexico) is a Mexican-American musician who first got his claim to fame in the late 1960s with his band Santana, a combination of rock and Latin American music. His father, a mariachi player, taught Carlos how to play the violin at the age of five and guitar at the age of eight. When his family moved to San Francisco, California, the musician decided to stay behind in Tijuana. However, he eventually joined his family in the US, including his brother Jorge, who would also become a professional guitarist. Carlos attended middle school and graduated from high school, but chose not to attend college even though he was accepted to multiple universities. After many years of struggling to become a professional musician, Carlos was signed by CBS records, with his band Santana in 1969. The years that followed, Carlos Santana gradually gained success and became a well-known name in music. His fusion of latin rock, blues rock, and jazz was unique to the times. Carlos has recorded seven studio albums and has won 10 Grammy Awards.

Best Known For:Carlos Santana is best known for being a talented musician and guitarists. He has been listed as one of the greatest guitarists of all time. Some of his most popular songs are “I’m Feeling You,” “She’s Not There,” and “Samba Pa Ti.”

Personal Life:Carlos Santana became a U.S. citizen in 1965. He was previous married to Deborah Santana for 34 years, however the couple divorced in 2007. Three years later, he married drummer Cindy Blackman. The musician has three children: Salvador, Stella, and Angelica. He currently lives in Las Vegas, Nevada.