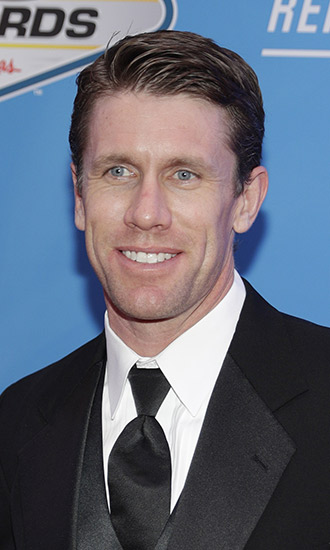 Bio:Carl Edwards (born Carl Michael Edwards II in Columbia, Missouri on August 15, 1979) is a retired stock car racing driver, who last competed in the Monster Energy NASCAR Cup Series as the No. 19 Toyota Camry for Joe Gibbs Racing. He was one of four drivers to qualify for the 2016 championship finale. Although he’s one of the greatest drivers of his time, Edwards has never won NASCAR Premier Series championship. He tied with Tony Stewart in 2011 for the championship, but Stewart ended up taking the victory in a tiebreaker for most race victories in that particular season. Before becoming a full-time driver, Edwards was a substitute teacher. He had his big break in the sport in 2002 when he competed in 7 NASCAR Craftsman Truck Series evens for MB Motorsports.

Edwards announced that he would be retiring from racing to pursue other opportunities on Jan. 10, 2017. He spent 13 years in NASCAR’s cup series. He has 28 career Cup wins under his belt, 220 top-10 finishes in 445 starts, 22 poles, and 124 top fives. Daniel Suarez is set to replace Edwards as the driver of the Joe Gibbs Racing team’s No. 19 Monster Energy Cup Series Toyota.

Best Known For:Carl Edwards is best known for being an award winning stock car racing driver. He is known to do a backflip off of his car to celebrate his wins.

Personal Life:Carl Edwards married Katherine “Kate” Downey on January 3, 2009. They have two children together — Michael and Anne. He is the first cousin of American racing driver, Ken Schrader. Edwards revealed in 2016 that his great-great-great grandfather is Rutherford B. Hayes, the 19th President of the United States. Although he is outgoing, loved by his fans, and a popular client of his sponsors, Edwards is known for keeping his personal life private. He is not very active on social media, either.