Cardi B heated up the MTV Video Music Awards red carpet on August 26 in Newark, NJ! The Grammy-winning rapper sizzled in a sultry red dress that showed off her thighs with two daring slits.

Cardi B turned the MTV Video Music Awards red carpet into her very own runway on August 26! The “Press” rapper, 26, stunned in a plunging red rope dress. Cardi sported a black, long bob haircut and accessorized with gold, chunky bangles. — See her full look below!

Cardi’s 2019 VMAs look was a much different vibe than her ensembles in past years. The rapper, who donned a black, choppy pixie haircut at last year’s show, rocked three different dresses in 2018. Cardi wore a high-slit fuchsia velvet gown by Nicolas Jebran on last year’s red carpet, along with millions of dollars in jewelry by Lorraine Schwartz. She later changed into a red strapless gown with a long train by Azzi & Osta to accept her Moonman trophy on stage. Cardi ended the 2018 show dressed in a little black dress with oversized, ruffled sleeves and a plunging neckline.

While Cardi won’t be performing, she is nominated for four VMAs this evening — Artist of the Year; Best Hip Hop (“Money”); Best Pop (“Please Me” w/ Bruno Mars); Best Dance (DJ Snake ft. Selena Gomez, Ozuna & Cardi B – “Taki Taki”); Cardi, who has attended the VMAs the last two years, appeared to be at the show solo, without her husband, Migos rapper, Offset. 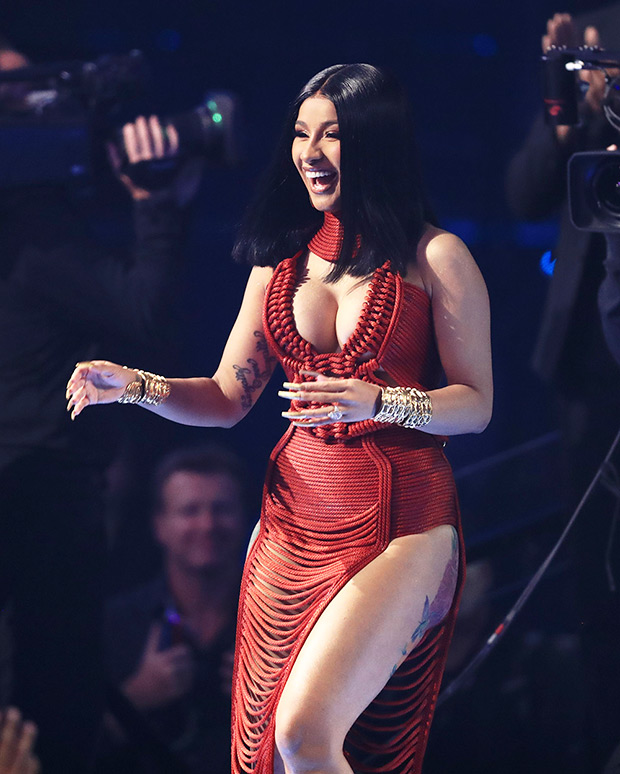 The mother-of-one flew to the east coast after a full press day in LA on August 25 for her forthcoming film, Hustlers, which hits theaters on September 13. Cardi, who stars alongside Jennifer Lopez, Lili Reinhart, Constance Wu, Keke Palmer and Lizzo,plays an exotic dancer in Hustlers.The film follows a group of strippers, led by JLo, who scam their wealthy clients after the financial crisis of the late 2000s.

Cardi has been very vocal about her past as a stripper in the Bronx, New York, which gave her an advantage heading into filming. However, the rapper recently revealed that she couldn’t use her skills on the pole to the best of her ability.

“You know what? I was really mad because let me tell you something — when I did the movie, I just got my t**ties done and I got lipo, right? So I was like, ‘This is my moment to shine, and I can’t shine because I can’t climb!’” Cardi told Entertainment Tonight on Sunday. “So I was mad. I was like, ‘Goddamn it!’”, she added.

Scarlett Johansson VS. Brie Larson: Which ‘Avengers: Endgame’ Premiere Dress Was Your Fave?