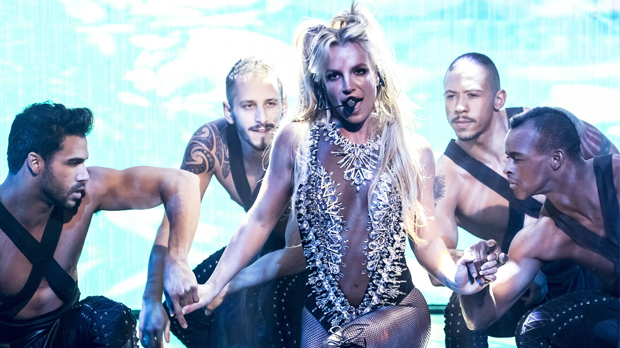 Bio:Britney Spears (born Britney Jean Spears in McComb, Mississippi on December 2, 1981), is an American singer, actress and entertainer. She joined the Mickey Mouse Club at age 11, sharing the screen with future stars, Justin Timberlake and Christina Aguilera. She traded in her mouse ears for a sexy prep school uniform in her first hit single, “…Baby One More Time”. Britney rode the pop wave at the turn of the century, churning out more hits like, “Oops!…I Did It Again,” “I’m A Slave 4 You,” and “(You Drive Me) Crazy”. Her life got crazy when she married Kevin Federline in 2004, after just three months of dating. The couple broadcast their life together in Britney & Kevin: Chaotic. After their divorce 2006, Britney’s life hit more wrong notes — she shaved her head, temporarily lost custody of her two sons and did a few stints in rehab. Recently, she’s made a total comeback, joining Simon Cowell at The X-Factor judges’ table.

Personal Life:Britney Spears and her fellow Mousketeer Justin Timberlake were pop’s teen dream couple in the early 2000s. She married her childhood friend Jason Allen Alexander on January 3, 2004 in Las Vegas, then turned around two days later for a quickie divorce. Later that year, she married Kevin Federline and the couple had two children, Sean Preston and Jayden James. She and Kevin divorced in 2007. Britney got engaged to her former agent, Jason Trawick, in April 2012 but the two split in January 2013. In Nov. 2014, Britney started dating businessman Charlie Ebersol. However, after only 8 months of dating, the pair broke up in June 2015.