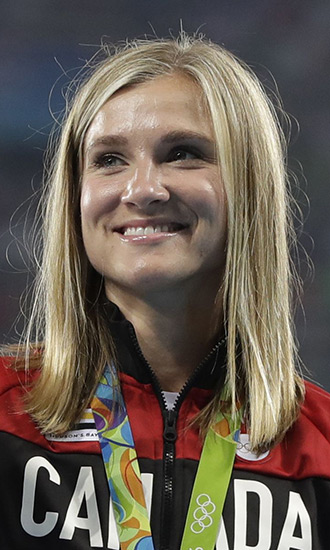 Bio:Brianne Theisen-Eaton (born Brianne Theisen in Saskatoon, Saskatchewan Canada on December 18, 1988) began running young. She first joined track & field when she was 13 and competed in her first heptathlon in 9th grade. Brianne competed in college at the University of Oregon, where she would meet her husband fellow track star Ashton Eaton. Brianne attended the Olympics in 2012 at London, 2015 in Toronto, and 2016 in Rio where she won bronze.

Best Known For:Brianne is best known for winning Canada’s first ever medal in the heptathlon. She took home the bronze medal and announced her retirement in Jan. 2016.

Personal Life:Brianne married decathlete Ashton Eaton in July 2013. They met while competing at the University of Oregon. The couple announced their retirement in January 2016.