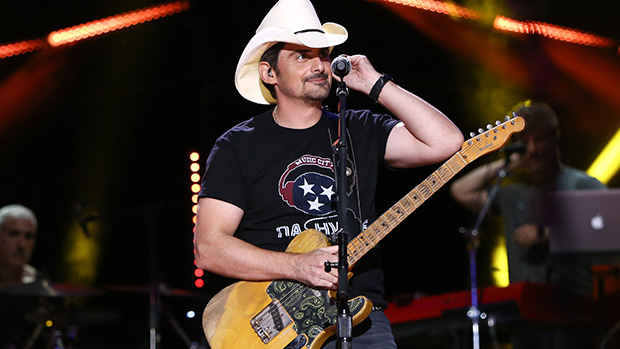 Bio:Brad Paisley (born Brad Douglas Paisley on October 28, 1972 in Glen Dale, West Virginia) is an American country singer. Since his start in 1999, he has released ten albums, eight of which have gone to No. 1 on the Country Billboard charts. He has 17 No. 1 singles, and has headlined ten U.S. tours. Brad has guest-starred on episodes of hit TV shows like Nashville and Two And A Half Men, and was also a judge on Rising Star, a singing competition show which lasted one season on ABC. He has won three Grammy Awards, along with several CMA and ACM awards.

Best Known For:Brad is best known as a country singer, with hits like “Ticks,” “Mud On The Tires” and “This Is Country Music.”

Personal Life:Brad was dating fellow country singer, Chely Wright, in 2000, but, unbeknownst to him, she moved in with her female partner at the same time. He began dating Kimberly Williams in 2001, and they got married in March 2003 after being engaged for nine months. Together, they have two sons, Huck and Jasper, born in Feb. 2007 and April 2009, respectively.