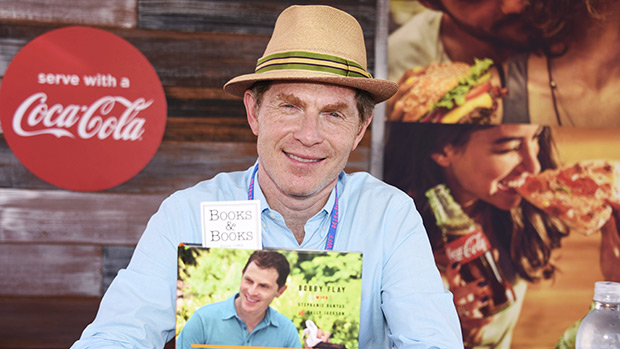 Bio:Bobby Flay (born Robert William Flay on December 10, 1964 in New York City, New York) is an American chef, restaurateur and reality television personality. Bobby demonstrated his culinary intentions as early as age 8, when he asked for an Easy-Bake Oven for Christmas. He would follow these aspirations, dropping out of high school at age 17 to work full-time in restaurants. Bobby enrolled in the then-French Culinary Institute (now International Culinary Center) and graduated in 1984. Restauranter Jonatham Waxman would introduce Bobby to southwestern and Cajun cuisine, ultimately defining Bobby’s culinary career. In 1991, Bobby became the executive chef at the first Mesa Grill. Shortly afterwards, he became one of the restaurant’s partners. Bobby would open a second and third Mesa Grill in Las Vegas and the Bahamas, respectively. Bobby made his first appearance on the Food Network in 1994, leading him to become a television fixture along the likes of Mario Batali, Emeril Lagasse and Rachel Ray. Since that first appearance, Bobby has hosted thirteen cooking shows and specials on Food Network and the Cooking Channel.

Best Known For:Bobby is best known for being a chef famous for his southwestern cuisine and multiple television appearances.

Personal Life:Bobby’s hobbies include golf, baseball and thoroughbred Horse racing. As of 2015, he is currently serving on the board of directors for the Breeder’s Cup. Bobby married chef Debra Ponzek in 1991. The two divorced in 1993. In 1995, Bobby and Kate Connelly married. The two had a daughter, Sophie, before they also divorced. Bobby and actress Stephanie March married in 2005. On Apr.9, 2015, the two announced their separation with plans to divorce.