Yaaaaaas, queen! Work that runway! ‘Pose’ star Billy Porter brought some gender-fluid glam to the Academy Awards by strutting down the red carpet in a gown that earned tens across the board!

Category is: Oscar Eleganza Extravaganza. Billy Porter, 49, who turned heads at New York Fashion Week, decided to leave everyone gagging in amazement with his dress that crossed all sorts of gender barriers to storm to the top of the Best Dressed list. The Pose star arrived at the 91st Academy Awards on Feb. 24 in black velvet Christian Siriano dress and matching bolero jacket. The outfit was divine. With a tight waist and a touch of jewelry, the outfit would earn “10s” from any of the ballroom judges from Paris Is Burning. Work!

“When you come to the Oscars, you must dress up,” Billy tweeted after arriving at the awards show ceremony. “Thanks @CSiriano for creating this custom couture masterpiece. @OscarHeymanBros you have outdone yourselves with your iconic jewels. Style by @sammyratelle Grooming by Anna Bernabe. @TheAcademy #AcademyAwards2019 #oscars #oscars2019.” It will be hard for anyone to top Billy’s outfit. Can he take home an Oscar – any Oscar – for that outfit? It deserves ALL the awards.

Billy is known for “breaking barriers with his signature gender-fluid style,” according to The Hollywood Reporter, and this appearance on the red carpet is not the first time he’s worn a dress. He donned more than 20 looks as NYFW’s official male ambassador, incorporating masculine and feminine elements in his outfits. Recently, he wore a long marigold-colored Calvin Klein gown (with a matching jacket) at the American Film Institution Luncheon in January 2019. The outfit wasn’t just a fashion statement – it was an actual statement. “The category is: ORGANIC GOLDEN HONEY. Thank you @americanfilminstitute for recognizing our show @poseonfx which highlights the lives of our marginalized brothers and sisters from the LGBTQAI+ community. I wear this @calvinklein dress in your honor. May you shine as bright as this golden yellow,” he said in a Jan. 31 Instagram post. 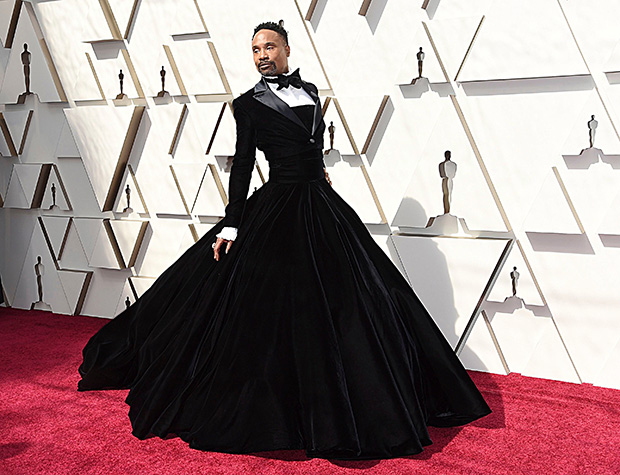 Actually, Billy’s stylist, Sam Ratelle, also deserves all the Oscars. “I started working with Billy in February of last year,” Sam told Forbes in January. “We met through my husband Ryan Ratelle who had previously been Billy’s publicist during his time in Kinky Boots on Broadway. From the moment we started working together, he has trusted me so implicitly and allowed me to do what I do best. … Billy is one of the most authentic humans I know. He is politically charged and well aware of the power of his voice in the LGBTQ community and beyond. It is imperative for both of us to highlight and support not only people of color, but our LGBTQ family.”

‘RHUGT’: Kyle Richards Admits She & Mauricio Umansky Had Sex At A Black Tie Event… At The Table

Charlize Theron Shines In Sparkling Gown At The 2020 SAG Awards