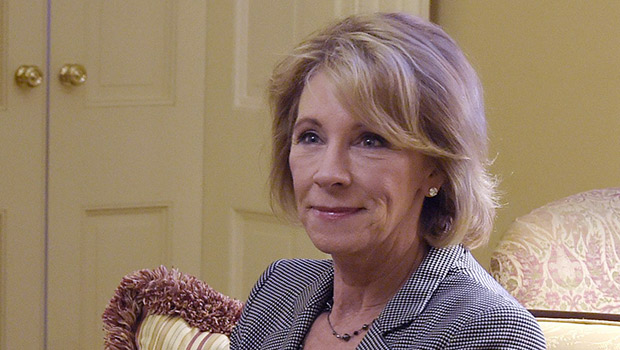 Bio:Betsy DeVos (born Elisabeth Prince on January 8, 1958 in Holland, Michigan) is an American business woman and philanthropist. She is a member of the Republican Party and Donald Trump’s nominee to serve as Secretary of Education. She was on the Republican National Committee for Michigan from 1992 to 1997 and served as Chairwoman of the Michigan Republican Party from 1996 to 2000. She is a defender of the Detroit charter school system and advocates school choice and voucher programs. Notably, in her nomination hearing, when asked if she believes guns should be allowed in school, Betsy responded by saying the guns were necessary to shoot “grizzlies” in Wisconsin. She was approved by the Senate on Jan. 31, 2017.

Personal Life:Betsy is the daughter of Edgar Prince, founder of the Prince Corporation. Her brother, Erik Prince, is the founder of Blackwater USA, renamed Academi. She is married to Dick DeVos, the former CEO of the marketing company Amway. Betsy and Dick have four children.