To no one’s surprise, Bella Hadid totally owned the Cannes Film Festival red carpet with a marvelous mini dress that has everyone talking.

Nobody slays a red carpet quite like Bella Hadid. Like all the years past, the 24-year-old supermodel was once again a fashion icon at the 2021 Cannes Film Festival on Wednesday, July 7 in Cannes, France. This time, Bellastole the show with a stunning white feathered and black mini dress and dazzling silver and green earrings. Bella’s unique outfit seemed to suit her mood, as she was all smiles while heading to the Chopard Dinner held at the annual star-studded film festival.

Bella’s been crushing her fashion game in Cannes. On Wednesday, she was dressed in a nostalgic black and white gown that had a long black train that followed her on the red carpet for the premiere of Leox Carax’sAnnette, according to InStyle. Bella finished off her look with her hair in a bun and diamonddrop earrings.Stars like Jessica Chastainand Helen Mirren were also at the event that Bella attended, the outlet reported.

Bella Hadid At Cannes Film Festival Over The Years — PICS 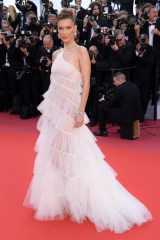 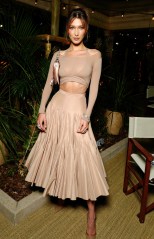 Bella’s fashion choices wasn’t the only reason she made headlines while at Cannes Film Festival. The model also confirmed her relationship withMarc Kalman on social media with a single photo thatwas sprinkled among a series of images she posted from the event. In the pic, Bellaleaned in for a kiss from her guy, with her arms wrapped around his neck, while Marc placed his arms on Bella’s waist to pull her in closer for a hug. Bella didn’t tag Marc in the photo, but it’s all but confirmed that he’s indeed her new beau.

Bella was previously photographedhanging out with Marc and some other friends in New York City in June 2021. Marc has a private Instagram page with only 3,000 followers, and one of them is Bella.HollywoodLifereached out toBella’s rep for confirmation on the relationship, but hasn’t heard back.

As fans know, Bella’s most recent public relationship was with The Weeknd, whom she was romantically on/off with from 2015 until 2019. They first got together in early 2015, but split nearly two years later in Nov. 2016 due to their busy schedules. After The Weeknd briefly dated Selena Gomez in 2017, he and Bella got back together the following year. The reconciliation lasted just over a year before they split for good in August 2019. But the two appeared to stay friends, and The Weeknd even attended Bella’s birthday party that October.