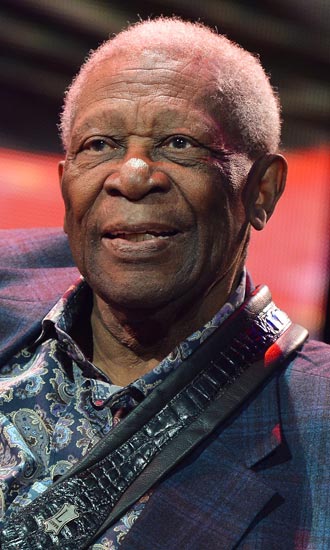 Bio:B.B. King (born Riley B. King on Sept. 16, 1925) is a blues musician, singer, songwriter and guitarist. His legendary career started in 1949 when he formed his band, the B.B. King Review with a variety of other blues musicians. However, he didn’t first start to become recognized until his 1952 single “3 O’Clock Blues” charted. He went on to produce other massive R&B hits including “Every Day I Have The Blues”, and became one of the most important names in R&B music, performing an average of 250-300 concerts per year until his seventies. He was inducted into the Rock and Roll Hall of Fame in 1987, and the 2014 class of the R&B Music Hall of Fame. B.B. went on a “Farewell” world tour in 2006, though he’s still been actively performing. However, as he ages, his health has hindered some of his concert appearances.

Best Known For:B.B. is best known for being a legendary and iconic blues singer, songwriter and guitarist. He’s often been referred to as “The King of Blues” as he created a legacy and paved the way for future blues musicians.

Personal Life:B.B. was married to Martha Lee Denton from 1946 to 1952 and to Sue Carol Hall from 1958 to 1966, though both marriages ended due to his tour schedules. It’s been reported that he has fathered 15 children, and since 2004, has 50 grandchildren. B.B. suffers from Type II diabetes, which he has lived with for nearly two decades. The musician has appeared in multiple advertisements for diabetes-management products to help fight the disease.