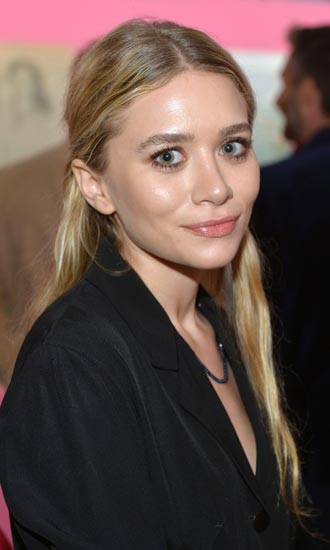 Bio:Ashley Olsen (born Ashley Fuller Olsen on June 13, 1986 in Sherman Oaks, California) is an American actress, fashion designer, author and businesswoman. She and her twin sister, Mary-Kate Olsen, began their acting career in 1987 at only nine months old when they were cast in the role of Michelle Tanner on the sitcom Full House. By the end of the show in 1995, Ashley and her sister had released a string of straight-to-video movies and became pop culture figures of the 90’s and early 2000s. In 1993, Ashley and her sister formed their own production company, under which they released all their television, film, magazine and video game properties. In 2004, Ashley and her sister appeared in the romantic comedy, New York Minute, which marked the end of Ashley’s acting career. Ashley shifted her focus to fashion, developing the fashion line Mary-Kate and Ashley: Real Fashion For Real Girls. In 2006, Ashley and her sister were tapped at the faces of the upscale fashion line Badgley Mischka. Together, they developed a couture fashion label, as well as multiple fashion collections.

Best Known For:Ashley is best known for her portrayal of Michelle Tanner on Full House, as well as her movies with her sister, Mary-Kate Olsen.

Personal Life:Ashley is the older sister to actress, Elizabeth Olsen. Ashley graduated Campbell High School and attended New York University for a period of time with her twin sister. Ashley has been linked with fellow actor Justin Bartha, dating him for three years before breaking up in 2011. She has reportedly been linked with both Lance Armstrong and Jared Leto. Since January 2014, she has been involved with film director, Bennett Miller. In 2016, Ashley started dating 58-year-old financier Richard Sachs. The two broke up after 5 months of dating in March 2017.