Leave it toAriana Grande to drop jaws at the 2018 Billboard Music Awards! The 24-year-old singer turned heads in a black baby doll dress with a full skirt when opened the BBMAs at MGM Grand Garden Arena in Las Vegas on May 20. For her perf of “No Tears Left To Cry,” she looked sensational with thigh-high matching black boots and a black net bow atop her high light blonde and pink ponytail. She accentuated the outfit with a stunning diamond choker.

While we’re totally in love with her performance look, we can’t wait to see what she wears in the audience later tonight! She skipped the red carpet as she was getting ready to open the show and didn’t have time to flaunt a different outfit ahead of time. Her forthcoming albumSweeteneris expected to drop this summer. We’re so excited to see what she has in store! So far she’s gone with the same baby doll look in other promotional appearance, which features a tight top with straps around the top of her chest and a billowy skirt that starts high on her torso. 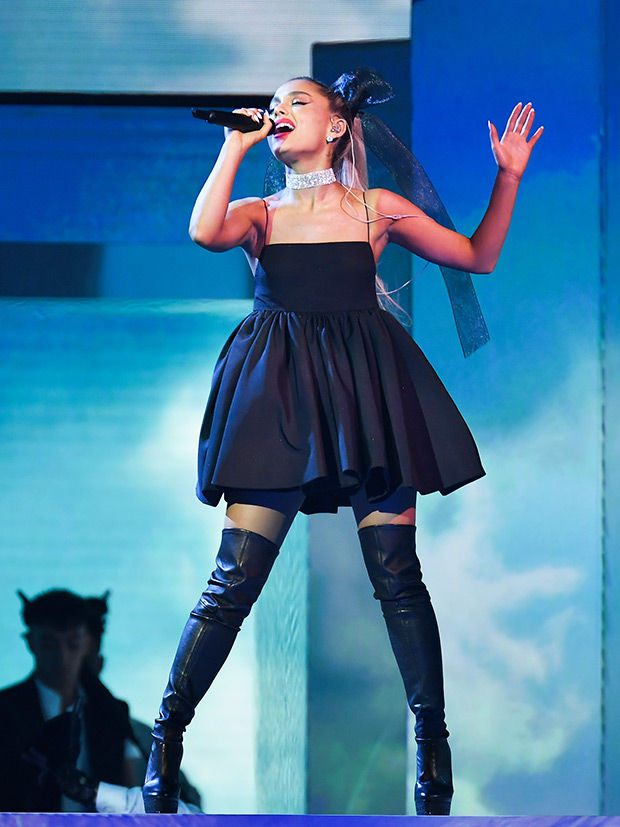 Ariana is nominated for Top Social Artist at this year’s awards show. This is one of the two fan-voted categories during the event, but she’s up against some stiff competition. Fellow nomineeJustin Bieber is the most awarded and nominated artist in this category. With eight nominations in total, he’s won six times in a row from 2011-2016. His winning streak was broken in 2017 byBTS, which were the first K-pop group to ever be nominated for and to win a Billboard Music Award. The group will also be performing at the show this year, and also got a nod in this category.

The 25 Best Met Gala Dresses Ever: See The Most Iconic Looks Of All Time