Angelina Jolie stunned on the BAFTAs red carpet in a black gown. She looked the epitome of fierce as an army of fans hold out hope for a Bennifer reunion after Jen’s split.

Angelina Jolie, 42,turned heads on the BAFTAs red carpet on Feb. 18 in an elegant black gown designed by Ralph & Russo. The dress featured off-the-shoulder straps and a slit. She had on long, dangling earrings and her hair was pulled back. As usual, Angelina was one of the best dressed of the night. Angelina wore black in support of the Time’s Up movement, an initiative to fight sexual misconduct around the country.

The BAFTAs was Angelina’s second public appearance since news of Jennifer Aniston, 49, and Justin Theroux’s split broke. Jennifer and Justin had been married for just two years before announcing their shocking breakup on Feb. 15. Angelina and her ex-husband Brad Pitt, 54, split in 2016 after two years of marriage. Jennifer and Brad were married from 2000 to 2005. Despite their highly-publicized split, Jennifer and Brad reportedly have each other’s numbers and text each other occasionally, according to PEOPLE.

But don’t hold your breath, Bennifer fans. HollywoodLife learned EXCLUSIVELY that Brad is “not happy that his name will be linked with hers [Jennifer’s] again” since he has nothing to do with Jen and Justin’s split. He wants to be “far removed from” from Jen and Justin’s breakup and is going to “do his best to avoid it and not address it.” 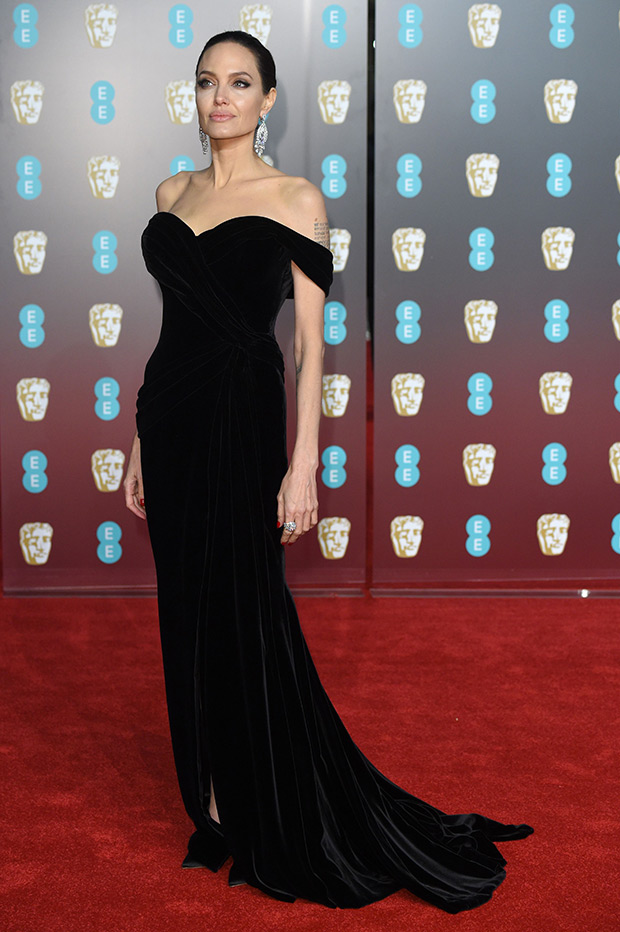 HollywoodLifers, what did you think of Angelina’s gown at the BAFTAs? Let us know!