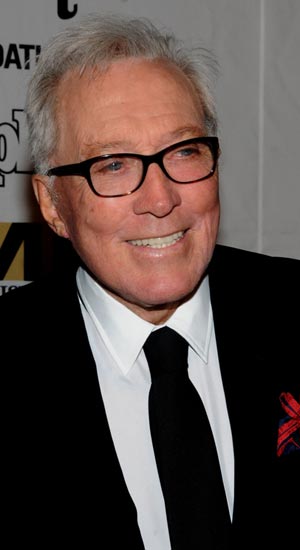 Bio:Andy Williams (born Howard Andrew “Andy” Williams in Wall Lake, Iowa on December 3, 1927) is an American singer. From 1962-1971, he hosted The Andy Williams Show, a TV variety show, which won 3 Emmy Awards. His solo career began in 1953, when he recorded 6 songs for RCA Victor’s label “X”. After appearing on Steve Allen’s Tonight Show in 1954, he was signed to a recording contract with Cadence Records. He reached # 1 on the Billboard list with his hit “Butterfly”. At the 1962 Oscars, Williams performed “Moon River” (which won an Academy Award) and it became his theme song. He ultimately became the owner of Cadence Records in 1964. He then formed a separate company called Barnaby Records in 1968. In 1970, Barnaby signed Jimmy Buffett and released his first album. He also hosted the most Grammy telecasts hosting them from 1971-1979. He was also well known for his Christmas albums and Christmas specials he performed regularly on television.

Personal Life:He married Claudine Longet on Decwmber 15, 1961 and had three children together Noelle, Christian, and Robert. They divorced in 1975. He remarried in 1991 to Debbie Haas. They have homes in both Branson, MO and La Quinta, CA. Andy is an avid golfer and hosted the San Diegeo PGA Tour golf tournamenet from 1968-1988. On November 4, 2011 it was announced that Andy had been diagnosed with bladder cancer.