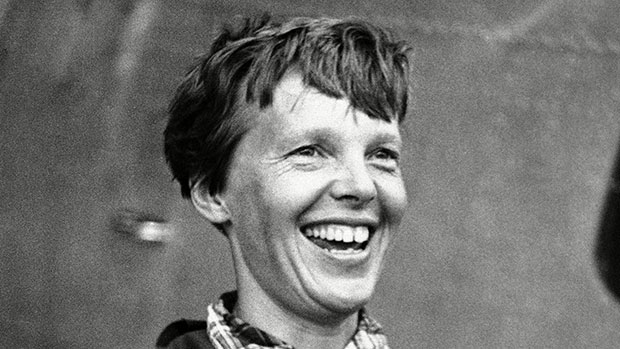 Bio:Amelia Earhart (born July 24, 1897  in Atchison, Kansas) was an American pilot and author. She was the first female aviator to fly solo across the Atlantic Ocean and was a pioneer for women in the field. She set many other records, including the woman’s world altitude record in 1922, the first person to fly the Atlantic twice in 1932), and the first person to fly solo from LA to Mexico City and from Honolulu to Oakland, CA! Not only did Amelia pave the way for the aviation industry overall, she also broke into the publishing industry becoming a best-selling author and magazine contributor. Amelia was a successful writer who served as aviation editor for Cosmopolitan magazine. Her first book, 20 HRs., 40 Min was published in 1928 and depicted her experiences as the first female pilot on a transatlantic flight. Her second book, The Fun Of It, was a memoir of her aviation experiences and an essay on women in the industry. Her final book, which is considered by historians to only be partially written by Amelia, was called Last Flight, published in 1937. The book featured periodic journal entries that she sent to the US while she attempted to fly around the world. The journals were compiled by her husband GP Putnam after she disappeared. Amelia’s disappearance is one of the the United States’ greatest mysteries. In her second attempt to fly a plane around the world in 1937, Amelia’s aircraft went missing in the early morning of July 2. She was declared legally dead on January 5, 1939, after her husband took over her home. Her cause of death is cited as death in absentia. Historians have a number of theories related to Amelia Earhart’s disappearance, believing the plane crashed and sunk or Amelia was captured by the Japanese.

Best Known For:Amelia Earhart is best known for her sudden, mysterious disappearance while attempting to be the first person to successfully fly an aircraft around the world.

Personal Life:Amelia Earhart moved around the United States often as a child — her father working in various jobs but struggling to keep them because of his alcohol addiction. In 1917, during WWI, she dropped out of junior college and received training as a nurse’s aid from the Red Cross to help the war efforts. She went on to enroll at Columbia University but quit a year later to be with her parents, who were living in California. In Long Beach, on December 28, 1920 Amelia took her first plane ride with famed air racer Frank Hawks, which inspired her to learn how to fly. She was taught by pioneer female aviator Anita Snook. Amelia became engaged to Samuel Chapman, a chemical engineer from Boston, but she broke it off in 1928. Around the same time, Amelia and publisher George P. Putnam were spending time together. George, known as GP, was divorced in 1929 and wanted to be with Amelia, proposing to her 6 times before she finally said “yes.” In a very modern courtship, they referred to their relationship as a “partnership” with “dual control.” The two never had children.