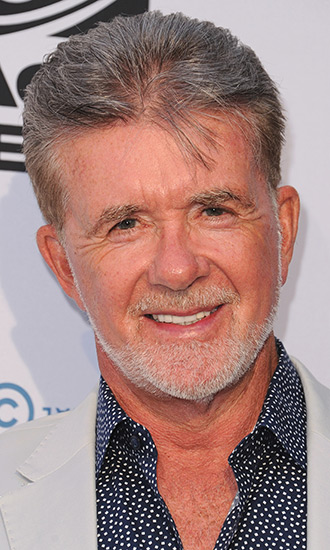 Bio:Alan Willis Thicke (born Alan Willis Jeffery on March 1, 1947) was a Canadian actor, songwriter, and game and talk show host, known for playing the father on the television series Growing Pains, Dr. Jason Seaver. He appeared in numerous other popular TV shows, including Fuller House, How I Met Your Mother, and This Is Us. He is the father of popular singer Robin Thicke. Alan received a spot on Canada’s Walk of Fame in 2013.

Best Known For: Alan is best known for playing the father on the TV series Growing Pains, Dr. Jason Seaver.

Personal Life:Alan was married three times and had three children. He first married Days of Our Lives actress Gloria Loring in 1970, and they had two sons, Brennan Thicke and Robin. He was then engaged to actress Kristy Swanson in 1988, though they broke it off. After that he married his second wife, Miss World 1990 Gina Tolleson in 1994, and had his third child, son Carter William Thicke. In 2005 he married Tanya Callau. Alan died on Dec. 13, 2016 of a heart attack he suffered while playing hockey with Carter.