Adam Driver was a gorgeous sight to see as he ran into water on a beach and greeted a horse, in a brand new ad for Burberry’s ‘Hero’ fragrance.

Adam Driver, 37, has a lot of fans talking with his new eye-catching ad! The actor showed off his fit physique while going shirtless for Burberry’s new Hero fragrance ad. In the video, which quickly went viral on social media, he slowly runs into refreshing water on a beach while wearing only black pants, and eventually meets up with a swimming horse before seemingly turning into the mythical creature of a centaur by the time he gets back onto the sand.

The unique ad gave off a kind of sexy vibe with fantasy undertones and received a lot of responses from Adam’s intrigued fans. “I FORGOT HOW TO BREATHE FOR A SEC THERE😩😩😩,” one fan wrote on Instagram while another simply but effectively wrote, “What a man.” A third shared, “No matter what Adam remains the hottest creature on the planet” and many more wrote, “OMG.” 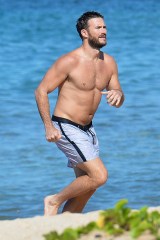 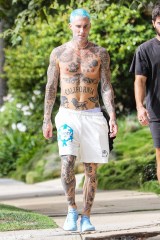 Adam’s latest ad comes after he’s been making headlines for recently released pics of him on the set of his upcoming movie, House of Gucci. The talented star is starring in the Ridley Scott-directed feature alongside Lady Gaga, 35, and plays Guccio Gucci‘s grandsonMaurizio. The film is a dramatization of Maurizio’s shocking murder and Gaga plays his ex-wife Patrizia Reggiani, who was tried and convicted for plotting his demise in 1995.

Adam’s recent impressive projects are a result of his talent and experience. The hunk rose to fame when he starred in the hit HBO series Girls before playing the role of Kylo Ren inthe latestStar Warstrilogy. He’s also been nominated for many prestigious awards in his career so far, including two Academy Awards nominations.

When he’s not busy taking on big roles in television or film, Adam is spending time with his family, including his wife Joanne Tucker and their son, whom they kept a secret for two years until the news made headlines in 2018.

Britney Spears Raves Over Hailey Baldwin Dressing As Her For Halloween: ‘How Freaking Cool’

Raquel Welch, 81, Seen For The 1st Time In Over 2 Years On Rare Outing: Photos Of Legendary Bombshell