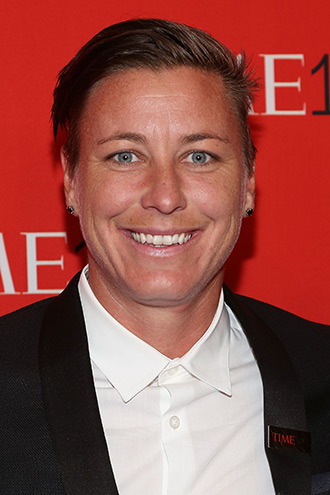 Bio:Abby Wambach (born Mary Abigail Wambach on June 2, 1980 in Rochester, New York) is an American soccer player. Abby began playing soccer at the age of four after one of her sisters decided she wanted to try the sport. Abby soon discovered she was a natural at the game. During her high school soccer career, Abby scored 142 goals! As a teen, she developed her signature move of diving headers. After graduating high school, Abby accepted a full athletic scholarship to the University of Florida in 1998. Playing with the Florida Gators women’s soccer team from 1998 to 2001, Abby led the team to the Final Four of the NCAA Division I Women’s Soccer Tournament in 2001. She also set the school records, scoring 96 goals, 50 assists and 242 points. She remains the school’s all-time leading scorer. After graduating, she was drafted by the WUSA’s Washington Freedom in 2002, becoming partners with soccer legend, Mia Hamm. She helped turn the last-place Freedom into a third-place team, leading them into the WUSA championship playoffs that year. Abby has played on a variety of professional soccer squads since then, and helped lead the USA team to third place finishes in the 2003 and 2007 World Cups (and a second place showing in 2011.) Abby was part of the 2004 and 2012 USA Olympic Soccer teams, winning the Gold Medal at both games. Abby finally won the World Cup in 2015, along with the rest of the US Women National team.

Personal Life:  She is the youngest of seven siblings. Abby married her longtime partner, Sarah Huffman, in October 2013, but announced in September 2016 that they would be divorcing. Abby began dating Christian blogger and author Glennon Doyle Melton in November 2016. Abby has worked with the Epilepsy Foundation and Juvenile Diabetes Research Foundation. She also has participated in Mia Hamm’s annual Celebrity Soccer Challenge, raising money for Children’s Hospital of Los Angeles.