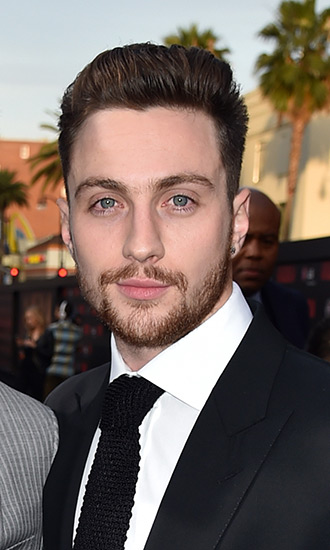 Bio:Aaron Taylor-Johnson (born Aaron Perry Johnson on June 13, 1990 in High Wycombe, Buckinghamshire, England) is an English Actor. Aaron began acting at the age of six and in his early career, he would have notable roles in the films Shanghai Knights (2003) The Thief Lord (2004) and The Illusionist (2006). He appeared as John Lennon in the 2009 biopic, Nowhere Boy. Aaron’s major breakthrough came when he appeared as the lead character in the 2010 movie, Kick-Ass, as well as its sequel. He continued his success with roles in the films Chatroom, Albert Nobbs, and Oliver Stone‘s, Savages. Aaron also starred as the main human protagonist in the 2014 version of Godzilla. Currently, Aaron will portray the superhero Quicksilver in the 2015 film, The Avengers: Age Of Ultron.

Best Known For:Aaron Taylor-Johnson is best know for starring as the superhero Dave Lizewski/Kick-Ass in the Kick-Ass movies.

Personal Life:Aaron changed his last name to Taylor-Johnson after he married director Sam Taylor-Wood in 2012. The couple have two daughters together: Wylda Rae and Romy Hero. He is also stepfather to the two daughters from Sam’s previous marriage. Aaron has said his favorite actor is Daniel Day-Lewis. In August 2014, police raided the home of Aaron and Sam Taylor-Johnson after neighbors spotted a machine gun in the couple’s sitting room. The gun turned out to be a deactivated M16 rifle givent to Sam by the international charity Peace One Day.