Is this Danica Patrick and Aaron Rodgers’ red carpet debut? — It sure looks like it! The 2018 ESPYS host shut down the red carpet with her NFL QB beau right by her side on July 18 in LA! She looked stunning in a one-sleeve, black mini dress!

Danica Patrick, 36, didn’t fly solo to the 2018 ESPYS! The show’s first female host was joined by her boyfriend, Green Bay Packers quarterback, Aaron Rodgers, 34. And, it looks like these two may have just made their red carpet debut as a couple! Patrick looked beautiful in a one-sleeve, black mini, with golden buttons spread throughout the dress. Meanwhile, Rodgers proved he’s been putting in work in the NFL offseason by showing off game-ready body on the red carpet in a dark black tux with a hint of blue, and a bowtie. The pair certainly looked like the king and queen of the ESPYS — See them below!

Patrick showed off her toned arms and legs in what we’re sure is one of many outfits she’ll stun in tonight. The former race-car driverchose just the right shoe — a gladiator-style, open-toe stilettos with ankle ties — for her pre-hosting duties. She wore her hair up and in a sweet but simple ponytail with effortless pieces of hair hanging by her face. So far, the powerhouse star nailed her first outfit of the night! 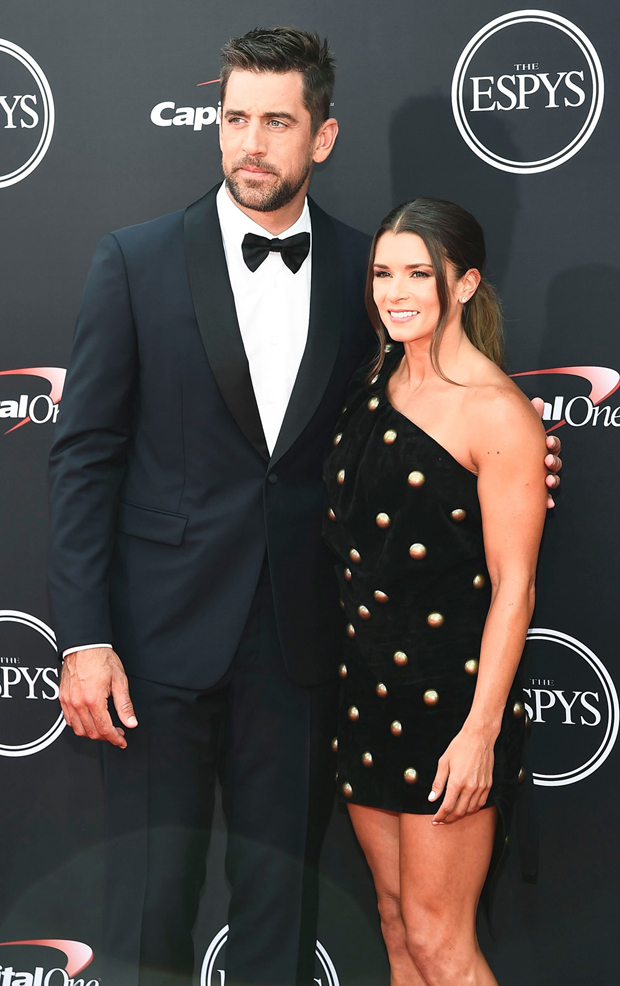 Danica Patrick and Aaron Rodgers on the red carpet at the 2018 ESPY Awards at Microsoft Theater in Los Angeles on July 18.

Rodgers also made a surprise cameo in one of Patrick’s hosting skits. She spoofed the film, I, Tonyaand hilariously dubbed hers, “Me, Danica,” where Rodgers was hysterical! Check out a clip below:

Patrick feels very grateful to have been chosen as the ESPYS’ first female host. “What an honor right? Aside form the fact that it’s unique and I’m the first woman hosting, just to be asked, it’s amazing,” she said on the red carpet. “I leave the ESPYS every year and I always feel so inspired, like i need to accomplish just to step up on that stage.” She also admitted that when she got the offer to host, she didn’t give an immediate answer. “It was so scary to me and I’m a very decisive person,” Patrick said. “I wanted to make sure I was really prepared for that.”

It’s a big night for Patrick, as we previously noted that she’s the first woman to host the ESPY Awards. And, she’s certainly done her homework to prepare for sports’ coveted stage.“They’re still finishing up the live skit stuff for me, but it’s like cramming for a test, when you do award shows, I feel like, you get it all at the end,” Patrick told PEOPLE ahead of her big gig. “For four or five days straight, all you do is you go over it, you read it, I rewrite it, I make edits, we talk about it, we practice. So it’s like cramming.”

She added, “The thing is, I don’t really know how to do that, because I didn’t really ever study for tests, so I’m not really sure how to cram, but I imagine it’s like that.”

Ahead of the show, Patrick also hinted that she recorded both live and pre-recorded skits, all of which include wigs, costumes and multiple characters. And, the rest is a mystery. But, we can’t wait to see what she has cooked up for tonight’s ESPYS!

As you may know, Patrick retired from racing afterMay’s Indianapolis 500, where she spun out and hit an outside wall in the 68th lap of the race. Although the unexpected crash couldn’t have been how she had wished to go out in her sport, Patrick is more than satisfied with her career.

“I did get a couple bruises, but more than anything, it bruised my ego,” Patrick said. “Every other day is a whole experience from getting back into an Indy car for the first time in seven years was amazing. When I think about it like that, the whole thing went so well until the very end. It could have been all bad.”